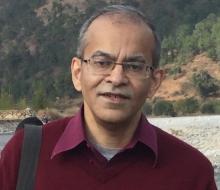 In partnership with the South Asia Center, Center for the Study of Contemporary China, and Perry World House

China’s rapid rise and power projection in the Indo-Pacific region is dramatically reordering power balances in India’s neighborhood, even as Beijing’s Maritime Silk Road push articulates and implements a comprehensive policy for the region. And while the erstwhile Cold War transformed South Asia, with effects reaching into the present, fresh geopolitical tensions are brewing between today’s superpowers, the United States, and China, with the Indo-Pacific region as its locus. This seminar will analyze strands of continuity and difference between Indian foreign policy in the past and in the present as it struggles to cope with ongoing tectonic shifts in global geopolitics, and examine how it is responding to widening power disparities with China by enhancing partnerships with the balancing "Quad" powers of the United States, Japan, and Australia. It will also make a case for why New Delhi could potentially leverage its position in the current geopolitical conjuncture to enhance its interests and cement its own rise somewhat better than it did during the erstwhile Cold War.

Swagato Ganguly has been Editorial Page Editor of The Times of India from 2009 to 2021. He obtained his Ph.D. in Comparative Literature and Literary Theory from the University of Pennsylvania in 1998, and has worked since then on editorial pages of Indian newspapers, commenting on national politics and international affairs. He is currently Research Affiliate, Lakshmi Mittal South Asia Institute, Harvard University and Consulting Editor of The Times of India. His contemporary research interests lie in strategic affairs, geopolitics of the Indo-Pacific region, Indian foreign policy in a complex, transforming world, and history of liberal thought in India. His two most recent books are: (as author) Idolatry and the Colonial Idea of India: Visions of Horror, Allegories of Enlightenment, Routledge 2018; (as anthology editor) Destined to Fight?: India and Pakistan 1990-2017, Times Group Books 2017. His research at CASI will focus on the geopolitical triangle between India, China, and the United States in the Indo-Pacific region.