The Chinese Communist Party at 100: Assessing Its Roles 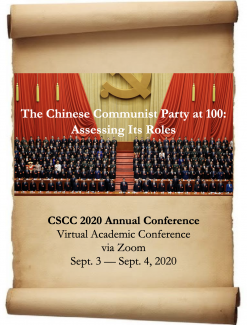 As the Chinese Communist Party nears the one hundredth anniversary of its founding and moves toward Xi Jinping extending his tenure beyond the (fragile) norm of a decade in the top Party (and state) posts, there are major issues concerning the Party’s changing roles in recent years and prospects for future developments: the Party’s relationship with other major institutions, including government / state organs, the military, and courts and the legal system; the Party’s relationship with economic actors and social groups, including state-owned or state-linked enterprises, entrepreneurs and private businesses, old and new media, and civil society / non-governmental organizations; and other perennially important issues for the Party, including ideology, corruption, policy implementation, external relations (such as united front work or soft power efforts, as distinct from the state’s foreign policy), and intra-elite politics.  What is the Party’s role in each of these issue areas?  Where has it succeeded and what challenges does it face?  Has there been an inflection point or significant change during the Xi era, or is there some other inflection point?  What are the prospects as the Party enters its second century? To address such questions, the conference will convene a group of leading China scholars to share their expertise and insights.

(This conference is open to University of Pennsylvania faculty, students, postdocs, and staff, and affiliates of the Center for the Study of Contemporary China.  Others may join with permission and subject to capacity constraints.  Please RSVP at https://forms.gle/MAGBeKfuE4CXfk6D9 to receive a Zoom link.)

Business and the Party

The Party and the Private Sector

The Party Leads It All: The Return of Leninism with Chinese Characteristics for a New Era

The Party and External Relations

The Party in Uniform:The Institutional Irony of Chinese Gun Control

Xin He, University of Hong Kong

The Party’ Control over the Judiciary after Recent Reforms

The Party Rules All: The Impact of Multiple-Job Holding in Rural China

The Chinese Communist Party and Religion

The Party and the Media: Unpacking the Dynamic Relationship and the Challenges Ahead