Roundtable Discussion on US Foreign Policy and the Indo-Pacific Strategy 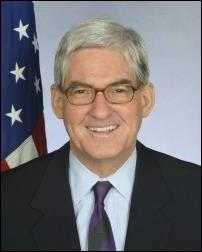 Walter Douglas is the Deputy Assistant Secretary of State for Public Affairs and Public Diplomacy in the Bureau of East Asian and Pacific Affairs at the U.S. Department of State in Washington, D.C.

Mr. Douglas was previously the Deputy Assistant Secretary of State for International Media Engagement in the Bureau of Public Affairs. Before that, he served overseas as minister counselor for public affairs at the U.S. embassy in New Delhi. Earlier, Mr. Douglas was a senior visiting fellow at the Center for Strategic and International Studies (CSIS) in Washington, D.C. His report “Engaging the Muslim World: Public Diplomacy after 9/11 in the Arab Middle East, Afghanistan, and Pakistan” was published in 2013.

Until October, 2011, Mr. Douglas was based in Islamabad as the director of communications for the U.S. mission in Pakistan. Before that, he served in Washington as executive assistant to the Under Secretary for Public Diplomacy and Public Affairs and as the director of the office of press and public diplomacy in the Near Eastern Affairs bureau. This followed a tour as public affairs officer at the U.S. embassy in Riyadh, Saudi Arabia.

Mr. Douglas also served as a public affairs officer at U.S. diplomatic missions in Turkey, Cyprus, and Iceland. He was deputy to the spokesman at the U.S. mission to the United Nations when Madeleine Albright was ambassador. Earlier, he served at the U.S. missions in South Korea and Cote d’Ivoire. Prior to joining the Foreign Service, Mr. Douglas worked as an advertising executive in New York and as a legislative assistant to a member of the U.S. House of Representatives. Mr. Douglas graduated from the University of Pennsylvania with a B.A. in history.