China’s Economy, Its Currency, and the State of the U.S.-China Economic Relationship 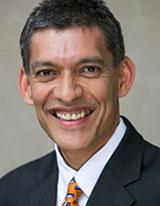 China’s economy is now the second largest in the world and its currency, the renminbi, has been elevated to the status of an elite official reserve currency. But China is facing slower growth, rising debt levels, and concerns about capital outflows. Is China’s economy headed for a meltdown or can it continue to outgrow its problems? Are U.S. economic power, and the dominance of the U.S. dollar, likely to be threatened by China’s ascendance?

The lecture will cover China’s economic prospects, risks that threaten to undermine the economy, and what it will take to maintain high growth. Drawing on his recent book on the renminbi, Prasad will discuss the future of the renminbi, both in terms of its value and its role as an international currency. The lecture will also review prospects for the U.S.-China economic relationship and the rebalancing of power between the two countries.

Eswar Prasad is the Nandlal P. Tolani Senior Professor of Trade Policy in the SC Johnson College of Business at Cornell University. He is also a senior fellow at the Brookings Institution, where he holds the New Century Chair in International Economics, and a research associate at the National Bureau of Economic Research. He is a former head of the China Division at the International Monetary Fund.

His latest book is Gaining Currency: The Rise of the Renminbi (Oxford University Press, 2016). His previous books include The Dollar Trap: How the Dollar Tightened Its Grip on Global Finance and Emerging Markets: Resilience and Growth Amid Global Turmoil, and his research has been published in a wide range of leading economics journals. He has testified before various U.S. congressional committees and commissions. His op-ed articles have appeared in the Financial Times, Harvard Business Review, New York Times, Wall Street Journal, and Washington Post. He appears frequently on Bloomberg, CNBC, CNN, NPR, and PBS.

Free, no registration required and open to all.