China's Foreign Policy in the Xi (and Trump) Era 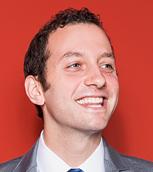 Since Donald Trump's surprise election victory, Beijing has grown increasingly assertive. If Trump ushers in a new era of American isolationism, will Beijing fill the vacuum left by the retreat of American power?

Isaac Stone Fish is a journalist and a senior fellow at the Asia Society's Center on U.S.-China Relations. He is on sabbatical from Foreign Policy Magazine, where he was most recently the Asia Editor.