U.S.-China Relations: View from the Administration 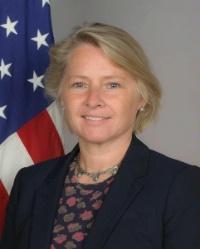 This lecture will speak on the current administrations view of China’s rise, some of the opportunities and challenges, and a discussion of current policy.

Susan Thornton assumed responsibility as Principal Deputy Assistant Secretary in February 2016, after serving for a year and a half as Deputy Assistant Secretary. A career-member of the United States Foreign Service, Ms. Thornton joined the State Department in 1991 and has spent the last twenty years working on U.S. policy in Eurasia, focused on the countries of the former Soviet Union and East Asia.

As Principal Deputy Assistant Secretary in the Bureau of East Asian and Pacific Affairs, Ms. Thornton is responsible for policy related to China, Mongolia, and Taiwan.

Previous Foreign Service assignments include Deputy Chief of Mission to the U.S. Embassy in Turkmenistan., Deputy Director of the Office of Chinese and Mongolian Affairs at the State Department in Washington, Economic Unit Chief in the Office of Korean Affairs, and overseas postings in Beijing, Chengdu, Yerevan and Almaty.

Prior to joining the Foreign Service, Ms. Thornton worked at the Foreign Policy Institute in Washington, D.C., where she researched and wrote about Soviet bureaucratic politics and contemporary Russia. She speaks Russian and Mandarin Chinese.