The US and China in the 21st Century 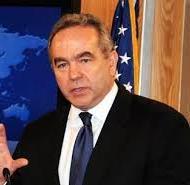 Kurt M. Campbell is the Founding Partner, Chairman, and Chief Executive Officer of The Asia Group.  He also serves as Co-Chairman of the Board of the Center for a New American Security, an independent director on the Board of Standard Chartered Bank, and a member of the Advisory Board of the UC San Diego School of International Relations and Pacific Studies, the Advisory Board of the Association of Marshall Scholars, the Council on Foreign Relations, the International Institute for Strategic Studies in London, and the Trilateral Commission. He serves as Senior Advisor to the 100,000 Strong Foundation, which seeks to strengthen U.S.-China ties through study abroad programs, as well on the Board of Directors at the National Committee on United States-China Relations.

From 2009 to 2013, he served as the Assistant Secretary of State for East Asian and Pacific Affairs, where he is widely credited as being a key architect of the “pivot to Asia.” In this capacity, Dr. Campbell advanced a comprehensive U.S. strategy that took him to every corner of the Asia-Pacific region where he was a tireless advocate for American interests, particularly the promotion of trade and investment. His vision and leadership were essential in the Administration’s efforts to strengthen security alliances and partnerships from Northeast to Southeast Asia and throughout the Indo-Pacific region. He was a central figure in advancing the U.S.-China relationship, including overseeing the annual Strategic and Economic Dialogue, helping usher in a new era of robust U.S. engagement with the Association of Southeast Asian Nations through the Lower Mekong Initiative and the East Asia Summit, and advocating for deeper American economic engagement and commercial ties in the Asia-Pacific Economic Cooperation meetings. Dr. Campbell is credited with spearheading President Obama’s and Secretary Clinton’s initial diplomatic outreach to Burma that led to the historic normalization of bilateral ties between the United States and Myanmar. In acknowledgement of his contributions in advancing U.S. national interests in Asia, he was awarded the Secretary of State’s Distinguished Service Award (2013) — the nation’s highest diplomatic honor.

Previously, Dr. Campbell was the CEO and Co-Founder of the Center for a New American Security (CNAS) and concurrently served as the director of the Aspen Strategy Group and Chairman of the Editorial Board of the Washington Quarterly. He was the Founder and Chairman of StratAsia from 2004 to 2009, a strategic advisory firm focused on Asia with nearly two dozen clients in the fields of financial services, defense, aerospace, manufacturing, and retail. He was the Senior Vice President, Director of the International Security Program, and Henry A. Kissinger Chair at the Center for Strategic and International Studies. He was also Associate Professor of Public Policy and International Relations at the John F. Kennedy School of Government and Assistant Director of the Center for Science and International Affairs at Harvard University. He was the Vice Chairman of the Pentagon Memorial Fund that successfully built the National Memorial at the base of the Pentagon in the wake of the 9/11 attacks.

Dr. Campbell previously served in several capacities in government, including as Deputy Assistant Secretary of Defense for Asia and the Pacific, Director on the National Security Council Staff, Deputy Special Counselor to the President for NAFTA in the White House, and White House fellow at the Department of the Treasury. He was concurrently an officer in the U.S. Navy Reserves, serving on surface ships, on the Joint Chiefs of Staff and in the Chief of Naval Operations Special Strategic Advisory Unit. For his service, he received Georgetown University’s Asia Service Award, the State Department Honor Award, and the Department of Defense Medals for Distinguished Public Service and Outstanding Public Service.

He is the co-author with Jim Steinberg of Difficult Transitions: Why Presidents Fail in Foreign Policy at the Outset of Power, with Michele Flournoy of To Prevail: An American Strategy for the Campaign against Terrorism, with Michael O’Hanlon of Hard Power: The New Politics of National Security, and with Nirav Patel of The Power of Balance: America in iAsia. He is the editor of Climatic Cataclysm: The Foreign Policy and National Security Implications of Climate Change, and The Nuclear Tipping Point: Why States Reconsider Their Nuclear Choices with Robert Einhorn and Mitchell Reiss. Dr. Campbell was a contributing writer to The New York Times from 2000 to 2004 and has published over a hundred articles in academic journals and other print media. Dr. Campbell writes a regular column for the Financial Times of London as part of “The A-List” and is currently writing a book about his experiences in the Obama Administration working on Asia, entitled The Pivot.

He received his B.A. from the University of California, San Diego, a Certificate in music and political philosophy from the University of Erevan in Soviet Armenia, and his Doctorate in International Relations from Brasenose College at Oxford University where he was a Distinguished Marshall Scholar. He is married to Dr. Lael Brainard, former Under Secretary for International Affairs, Department of Treasury, and together they live in Washington, D.C. with their three daughters.