Margaret Pearson, Professor of Government and Politics, University of Maryland 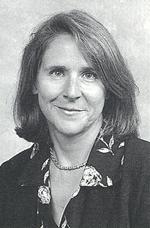 Margaret M. Pearson is Professor of Government and Politics at the University of Maryland, College Park, where she is a specialist in Chinese domestic political economy and Chinese foreign economic policy.  She received her Ph.D. in Political Science from Yale University and has taught at Dartmouth College, where she was promoted with tenure in 1994.

Her publications include the books Joint Ventures in the People's Republic of China (Princeton Press, 1991) and China's New Business Elite: The Political Results of Economic Reform (University of California Press, 1997), as well as articles in World Politics, The China Journal, Public Administration Review, and other journals.

Her research interests include PRC state control of the economy, China’s integration into the global economy and global institutions (e.g., WTO), Chinese regulatory institutions, and Chinese industrial policy. She teaches courses on Chinese domestic politics and foreign policy, and on comparative politics. She has held a Fulbright Research Fellowship at Beijing University.