To Get Rich Is Glorious 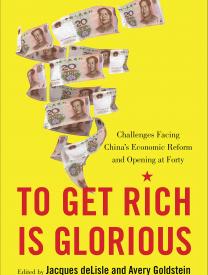 In 1978, China launched economic reforms that have resulted in one of history’s most dramatic national transformations. The reforms removed bureaucratic obstacles to economic growth and tapped China’s immense reserves of labor and entrepreneurial talent to unleash unparalleled economic growth in the country. In the four decades since, China has become the world’s second-largest economy after the United States, and a leading force in international trade and investment.

As the contributors to this volume show, China also faces daunting challenges in sustaining growth, continuing its economic transformation, addressing the adverse consequences of economic success, and dealing with mounting suspicion from the United States and other trade and investment partners. China also confronts risks stemming from the project to expand its influence across the globe through infrastructure investments and other projects under the Belt and Road Initiative. At the same time, China’s current leader, Xi Jinping, appears determined to make his own lasting mark on the country and on China’s use of its economic clout to shape the world around it.